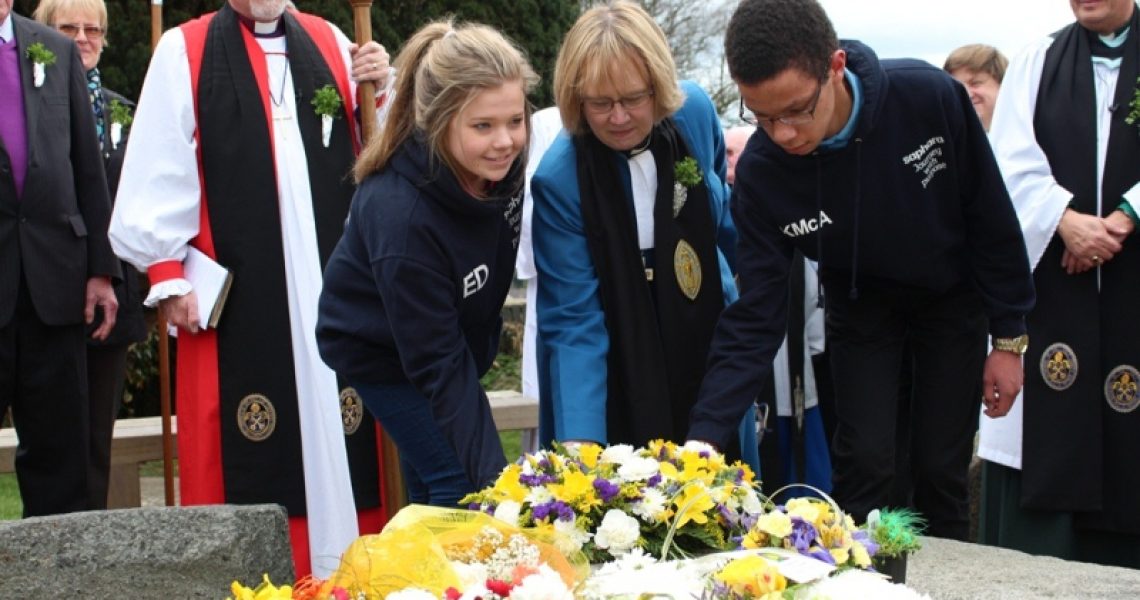 After a cold and wet 2013, St Patrick once more ‘turned the stone’ for the large band of Down and Dromore pilgrims making their annual journey from Saul Church to Down Cathedral on a glorious 17 March.

The theme this year was ‘Transforming a Nation for Him and our guest speakers were Hadden Wilson, former pastor of Ballynahinch Baptist, at Saul and at the Festival Service, Alain Emerson of Emmanuel Church Lurgan and 24–7 Prayer Ireland.

A group representing many nations and denominations set out from Saul Church after the service of Holy Communion at which Methodist President, Revd Canon Dr Heather Morris, presided. Heather made the pilgrimage with a simple wooden staff offered to her by Bishop Harold in recognition of the growing Covenant relationship between the Methodist and Anglican churches in Ireland. Other pilgrims included a 6–strong group visiting from Down and Dromore’s link Diocese of Albany.

Tash Creaney (pictured below with Alain Emerson) who is assisting the diocese in its year of 24–7 Prayer, led us at the various prayer stations along the route as we remembered the theme and brought our nation before God. Upon arrival in The Mall, as is the tradition, the pilgrims were piped to the doors of Down Cathedral where the Sullivan Traditional Music Group welcomed them into the narthex with traditional Celtic tunes.

Early in the service we paused to remember the late Eddie McGrady MP who had faithfully served the people of South Down as their MP from 1987 until his retirement in 2010. Eddie was a familiar face at Down Cathedral and at Dean Hull and Bishop Harold’s invitation, Margaret Ritchie MP and John McCallister MLA both paid tribute to their friend and colleague, praising his integrity and tireless Christian service to the community. We were delighted that Eddie’s son, Conal, was able to be present.

In his address, Alain Emerson said that St Patrick, “helped put in motion a movement that transformed our land. It started in the heart of a young, refugee, human–trafficked boy, whose heart was completely surrendered to God, whose desires were aligned with the desires of the Father – Christ in every part of His being as he would later write.  A boy who learned to prioritise the presence of God in his life and then lead a nation to do the same.”

Like the shepherd boy David, Patrick displayed wholeheartedness before God that drew his power and favour. Through his involvement with 24–7 Prayer Ireland, Alain said that he saw this wholeheartedness reemerging in Ireland as more and more churches gave themselves to prayer. He senses that God will move powerfully again in response as we carry his heart to the world in mission.

Alain’s address was followed by a beautiful rendition of ‘You’re the God of this City’ from singer and guitarist Sam Johnston. Sam, formerly of Ballyholme Parish, is coming to the end of his second year in the Church of Ireland Theological Institute and following ordination will serve as deacon intern in Shankill Lurgan.

The offering at the Festival Service is traditionally given to the Dean’s Travel Fund and this year the whole sum will go to Saphara, a non–profit, non–denominational Christian organisation whose strapline is ‘Journey with Purpose’. Saphara gives teams of young people the opportunity to engage in issues of justice and global citizenship through working with educationally disadvantaged children in India. Some of the 2013 Down Team joined us in the Cathedral and Eimear Downey from Assumption Grammar spoke about the life–changing experience she had last summer as part of a team including pupils from Down High and Sullivan Upper.

After the Festival Service, local ministers of all denominations gathered at St Patrick’s grave as our special guests laid a wreath. Everyone then enjoyed an Irish stew and apple tart lunch served in a marquee in the Cathedral grounds.

Even though we are currently closed for public worship the cathedral remains open for private prayer between 11.30am and 3pm, Monday – Saturday.

If you do visit please continue to follow current guidelines for everyone’s safety.

All services are live-streamed on the cathedral’s web cam.